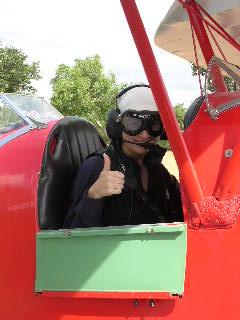 As we couldn't get a good view of the whole of the falls, I decided (me being Clare) to go flying again, in a 1941 Tiger Moth.

The photos are on the other camera though, so no overhead pics to put up. 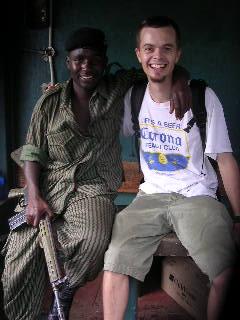 The border guard on the bridge asked us to take this photo so we could be penpals.

Well, when a man has a big gun, what else are you supposed to do?! 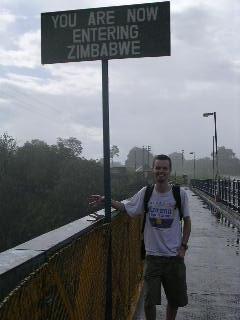 We officially crossed into Zimbabwe. Both feet over the line and everything. No stamp in our passports though. 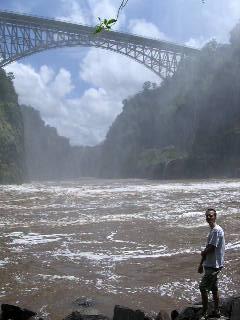 This is the point where the rafting trips begin in low water. This time of year its an enormous whirlpool, and usually the rafts have to start at rapid no 11. However due to the huge amount of water flowing down river at the moment, the river was closed to rafts, effective the day before we arrived. Doh!

By the way, that bridge in the background is where the sanity-challenged people bungy. 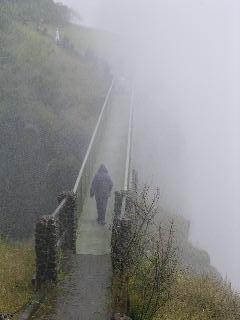 You get very, very Wet.

The traditional name of Mosi-oa-tunya means the smoke that thunders. Very appropriate. 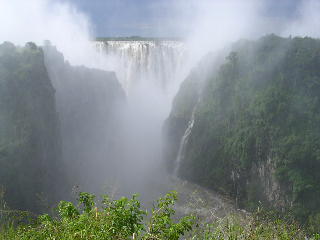 We are towards the end of the rainy season here, and boy has it been a good'n. We are told that they have had more rain this year than in the last 2 years put together. So there is a LOT of water flowing over the falls at the moment, about 9 million litres per second or to put it another way it is about 5 metres deep as it goes over.

It is 1 mile wide, but you just can't appreciate it. There is so much spray around, it is enveloped in a constant cloud of mist. 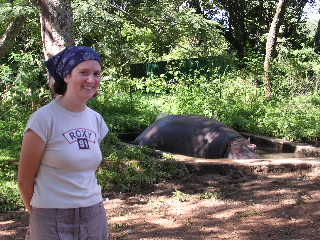 Along with the 100 chimps, the sanctuary also has a few monkeys and baboons, some birds, and one great big hippo. She was brought here when she was a few months old and hand raised. She is a bit friendlier than a wild hippo, but not much! She is now 12 years old and fully grown. Unfortunately she has no friends (hippos normally hang around in large groups) and is a bit lonely. Occasionally she will try to get into the houses around the complex, and has managed it a couple of times, causing rather a lot of damage! 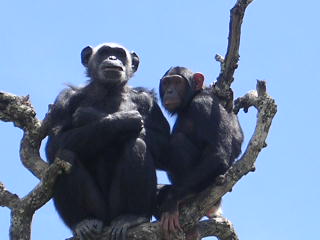 The sanctuary started when someone brought an injured baby chimp to an English couple that owned a farm in Zambia. They cared for it and nursed it back to health. News spread and more people brought chimps to them. They now have 100, from all over the world. Chimps found being smuggled in Russia, circus chimps from New Zealand, and a rich mans chimp from the united arab emirates to name a few. Some have been very badly treated, but they are a lot happier now. They live in family groups in huge enclosures (500 acres +). As close to living in the wild as they can get.

The english couple got an MBE a few years ago. 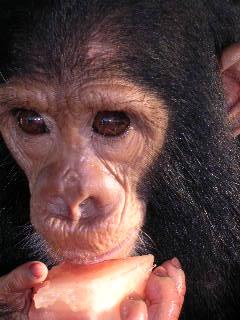 Simms is an orphan who is currently being raised by the daughter of the owner, in the house next to the campsite. He ran around in his nappy like a curious kid all day, before collapsing to sleep in a corner in the evening. Here he is enjoying some watermelon. 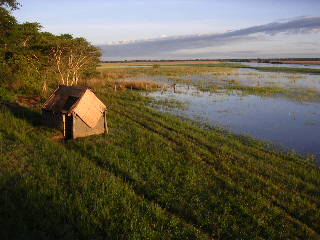 what a view! This is at Chimfunshi.

(thats the toilet block by the way) 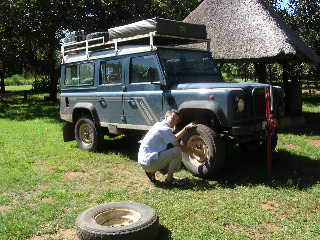 had to get one eventually! The fridge broke the same day as well which was much more worrying. Didn;t take long to sort out though. 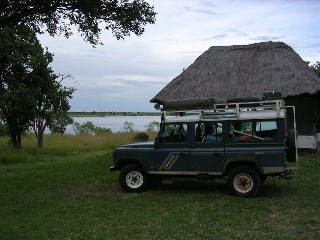 a bad decision on our part. We decided to drive 400 kilometres down a bad road to Kafue national park, only to find it entirely waterlogged. We still had to pay the park entry to stay at the campsite. An expensive nights camping!

It was a very nice campsite, on the banks of the river, and there was a beautiful sunrise in the morning (pics on the other camera). We did see some springhares at night. Kind of like a miniature kangeroo with a rabbits face. They are a unique species. Nothing else like them in the world! 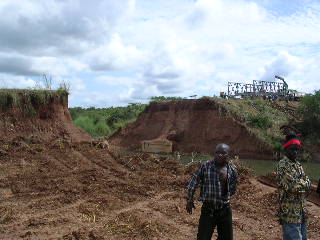 This is the bridge that caused us a few problems. It got washed away entirely, although now the water is about 5 metres below it. It has subsided a lot. We had to wait 2 days until the army had finished a temporary bridge. Could have been worse timing as it took them 8 days to do it. We then had to wait at the bridge while they pushed big lorries through the mud with a JCB one by one. We are through now though. That's Africa for you! 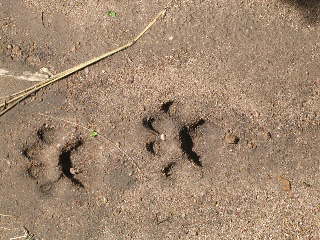 South Luangwa national park is possibly the best place to spot Leopards in Southern Africa. This is the nearest we got. 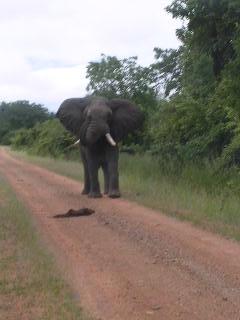 We saw an elephant walking down the road towards us, like in Addo national park a few weeks ago. We pulled over to the side of the road, switched the engine off, and waited for him to pass. This one wasn't quite so friendly though. Elephant, like people, have bad days.

He got to about 10 metres away, then stopped and stared. He flapped his ears, and swung his trunk around. Then he charged. I was still taking pictures, up until then. Clare shouted "reverse, reverse!" and reached over and started the car. We reversed off up the road, but he had already stopped, content that he had proved who was boss.

We spoke to a guide later who said we would have been fine if we had just sat there. It was only a mock charge, and he wouldn't risk hurting himself for no reason. Easy to say that though!

We saw him again the next day, and reversed a kilometre up the road to stay away from him! 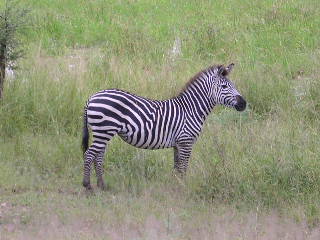 This is a Crawshay's zebra, that are only found in South Luangwa national park. Can you spot the difference to the Burchell's zebra we posted a picture of before?

(edited - don't think I have actually put up a photo of a Burchell's zebra before, just a mountain zebra. Oh well.)

Thought not. This one is more stripey, and the stripes extend all the way down the legs. It also has no browny shadow stripes at the back. So now you know! 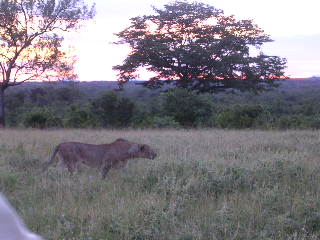 We did see lions before in Kruger, but were hoping to see some again. We saw a pride in the morning of this day, sheltering from the sun under a tree. On our night drive we went back to the same area, and at dusk they were out stalking a herd of zebras. This one lioness was advancing slowly towards them, while 2 more sat behind the herd hoping they would run in that direction.

They didn't, and got away. Great to watch! The lioness was nearly invisible a lot of the time, crouched low in the grass. It did walk right up to the car at one point though, ignoring us totally. 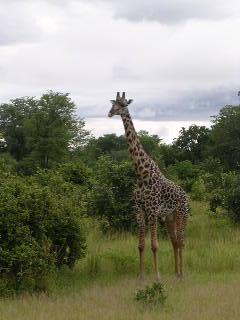 South Luangwa has about 700 of the 1200 Thornicroft's giraffes left. Not too many differences to a normal giraffe. The spots are darker, and they don't have them on their legs below the knee. That's about it.

There is also a type of wildebeest that is only found here, but we never saw one.